CALUMET FOOTBALL PLAYERS TAKE IT TO THE NEXT LEVEL 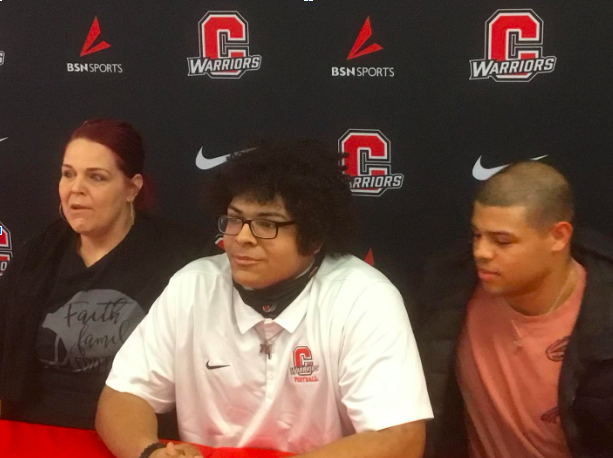 Calumet Football Players Take It to the Next Level

American football is played on a field 100 yards long and 160 feet wide. The game’s status in American lore is beyond iconic.

In high schools across the country, football is seen as an annual rite of passage. The season heralds the end of the tranquil days of summer, the start of school, and the beginning of cool autumn Friday nights. It’s the defining moment of a new senior class, pep rallies and homecoming. And sometimes, along the way, for the boys who play the game, it becomes transcendent and life changing.

Dedication and hard work on the gridiron and in the classroom paid off in the form of college football scholarships for three Calumet New Tech High School Football players this year.

On various days, school administrators, coaches, players and students joined with the football players, their families, and their friends to celebrate the crowning achievement of their successful high school football careers as they signed their national letters of intent.

Next school year, George Robert Winfield IV, will head to Indianapolis, where he will suit up for the Marian University Knights. Winfield, who played on the defensive line in high school, was also selected to this year’s All-State Football Team. The “A” Honor Roll student said he feels blessed to be able to play the game he loves at the college level.

“It feels surreal. I didn’t think it would ever come down to this,” he said of his decision to attend the prestigious Catholic university. “We just started talking this year, but they showed an interest in me in the long term. I went to see the school and felt the love there was mutual, like I belonged. Also, I love great coaching relationships, and I think I will have that there.”

“I’m proud of him,” she said. “He has definitely pushed himself through a lot of hardships—especially this last year, but this has been his best year. He has excelled everywhere he could.” Witte called her son a late football bloomer. “His older brother (Antwan) played (for Ball State University), but football really wasn’t his thing until he got to Calumet and we found out he could hit—and hit good,” she said with a smile. 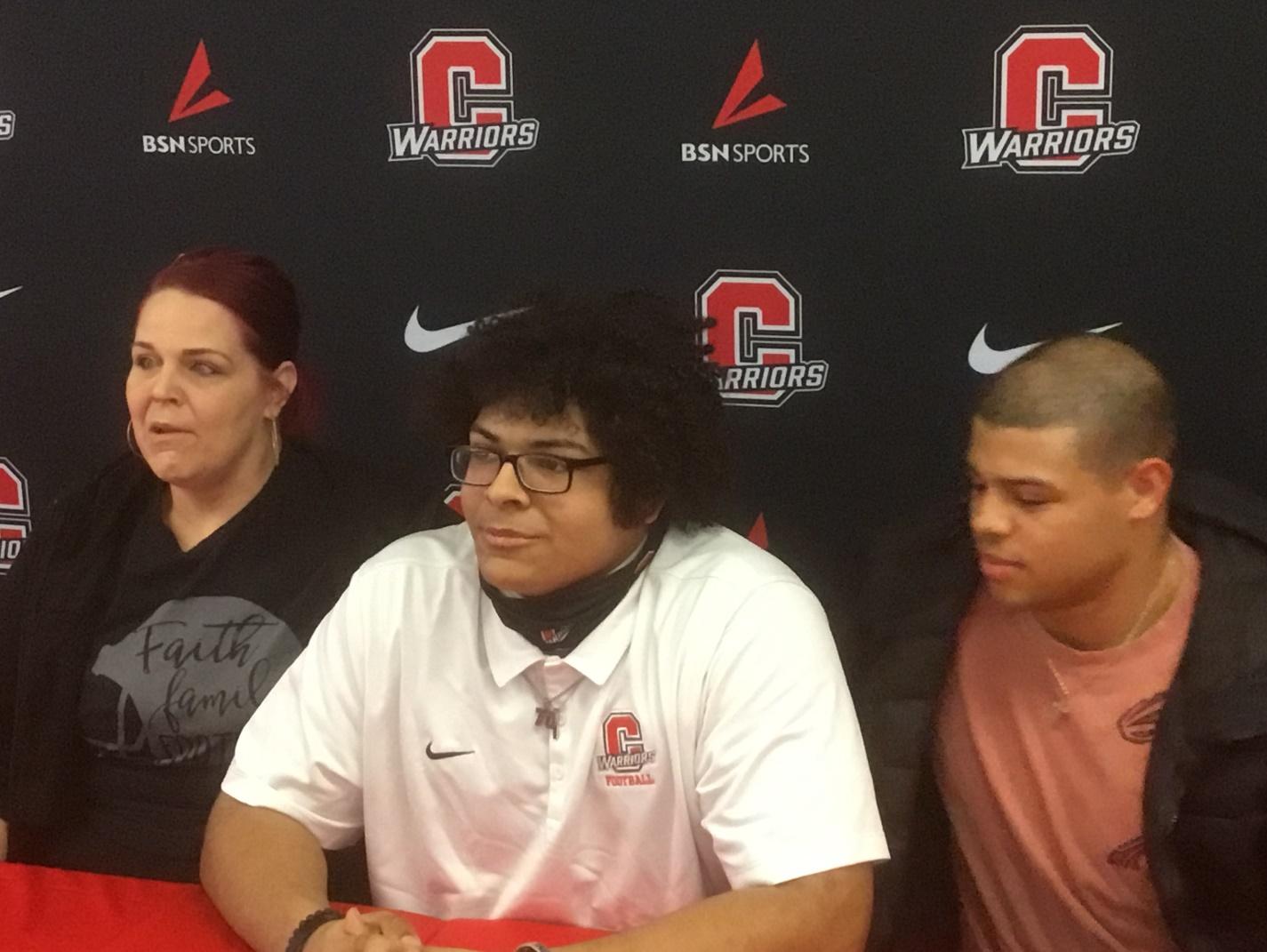 George Robert Winfield IV is joined by his mother, Jessica Witte, and brother, Antwan, as he discusses his decision to sign with the University of Marian in Indianapolis to play football next school year.

Koran Jefferson will be taking his football talents to a fine, out-of-state school. Iowa Wesleyan University is a private, four-year liberal arts school that’s the home of the Tigers and located in Mount Pleasant, Iowa. The six-foot, 265-pound defensive lineman is known for his aggressiveness on the field, but calls himself “a teddy bear off of it.”

The 18-year-old is the youngest of seven and says he was inspired by his father, John Jefferson, to play football. He started playing as a freshman at Bremen High School in Midlothian, Illinois. His family moved to Gary during his sophomore year, and he attended West Side High School before transferring to Calumet as a junior. He became a two-year starter, shifting from center to tight end and, eventually, to defensive tackle.

Jefferson played his senior year with a heavy heart. His mother, Sanya, was in a nursing home battling cancer during the season and was unable to see him play.

“She was very sick. I would visit her every other week,” he said. “We knew that she may pass, but we didn’t know when. I just wanted to make her happy.”

Sanya passed away on January 2, 2022. Getting a scholarship to play football was a goal he set for himself to make his mother proud. “I wanted to do it for her. I wanted to accomplish that for her,” he said.

According to Jefferson, the best part of playing for the Calumet Warriors is the teams attitude.

“When I came here, we wanted to win. We won sectionals—that was great,” he says.

John spoke of his son’s accomplishment through tear-filled eyes.

“I’m proud as a dad,” he said. “He’s a good kid—respectful, disciplined. I’m just really proud of him and I’m glad to see this panning out for him. I always told him to stick to it and don’t give up, and that’s what he did.” 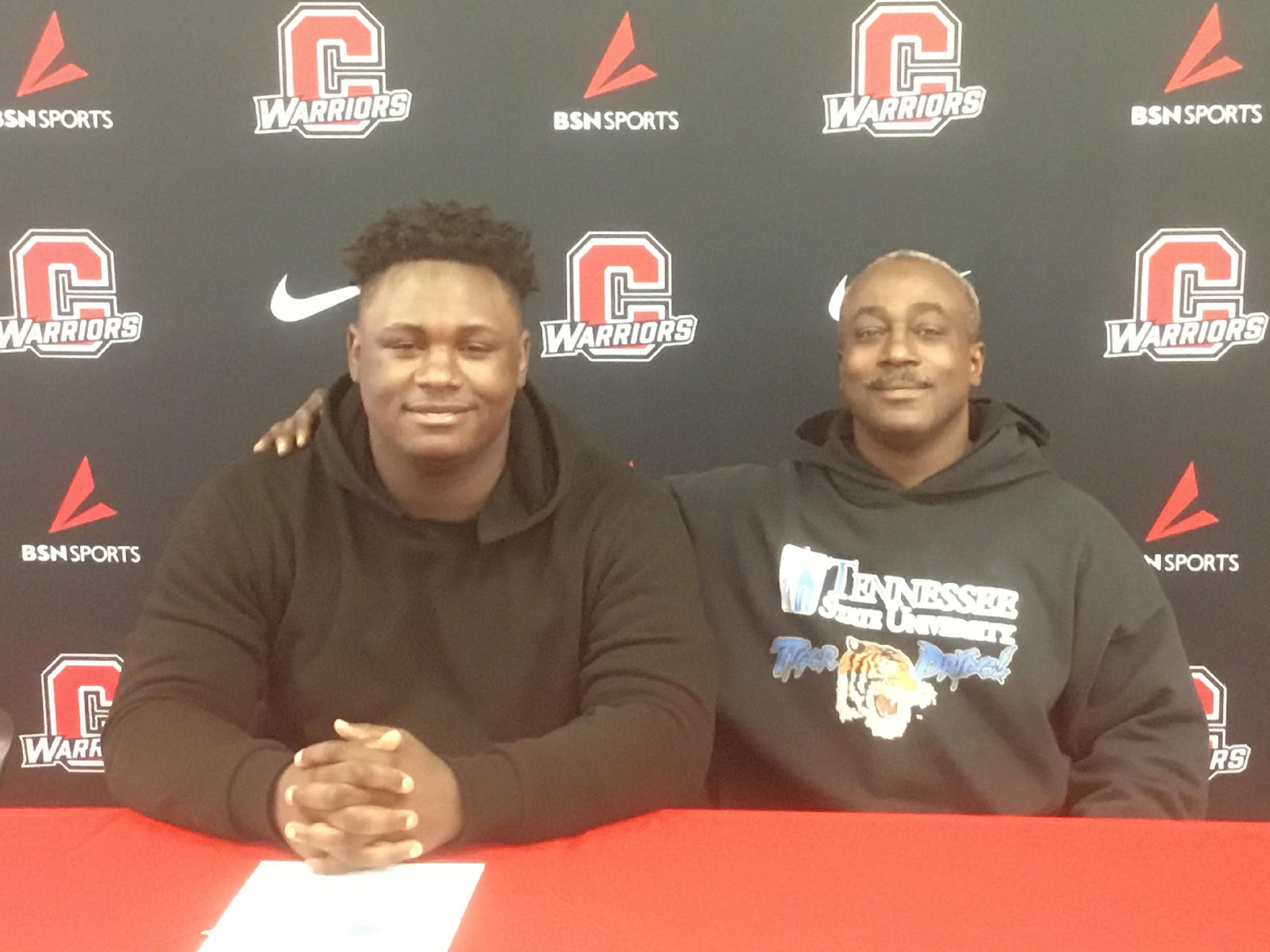 The next football field Quarterback Scott Flores steps onto will be located within the rich academic and athletic heritage of an Historically Black College and University (HBCU). His leadership and prowess landed him a scholarship with the Kentucky State University Thorobreds in Franklin, Kentucky.

For Flores, the road to a scholarship has been lined with tragedy and setbacks. On February 2, 2021, his mother, Reva L. Nieto, died unexpectedly. The loss devastated his family. A mainstay at Scott’s football games, her voice could often be heard cheering for the team from the stands.

To make matters worse, the free safety turned starting quarterback will never forget the first game of his senior year—because it was also his last. The Warriors were playing at home against Thea Bowman Academy. Calumet handily won 49-0, but following an awkward tackle, Flores broke his foot and was lost for the season.

“It was tough because I thought that this was my year to shine,” he said. “But when the adversity hit, it became a mind thing for me. I still showed up for practice and still encouraged my team to win. I was still a team leader. I put a smile on my face and made it through the day.”

For Flores, the sudden loss of his mother and injury to his foot taught him a life lesson. “I learned how you have to change when adversity hits. And it hits really hard. With me losing my mother and not playing, that’s when the adversity hit. I learned that I had to embrace that and do different things. It made me stronger as a person.”

Perhaps the easiest decision Flores had to make was to attend Kentucky State University. His older brother, Mark, is currently in his second year at the school and is on the football team.

“My brother and I are very close, so to be able to play football with him again will be great. My mother always told me to stick with my brothers.”

The Flores family is somewhat of an athletic dynasty in the Lake Ridge New Tech Schools. Scott is not the last member of the Flores family to excel in sports, as his youngest brother, David, is a junior and a promising football and basketball player in his own right. His sister, Alexis, is a sophomore who starts at the point guard position on the girls’ basketball team. While good at basketball, her father, Mark Flores, Sr., said her true talent lies on the softball diamond.

“She is really good—I am going to get her in the batting cage and she’s going to be something,” he promised.

The senior Flores thanked the staff at Calumet New Tech High School for all they have done for his children.

“I am honored as a father, and I want to tell the Calumet New Tech High School organization thank you for everything you have done for my kids. I really appreciate it from me and my whole family.”

When asked how he manages to keep all of his children active in sports and school he gave this advice: “Love your kids, stay behind them 100 percent, keep your head up high, and one day it will pay off for you.” 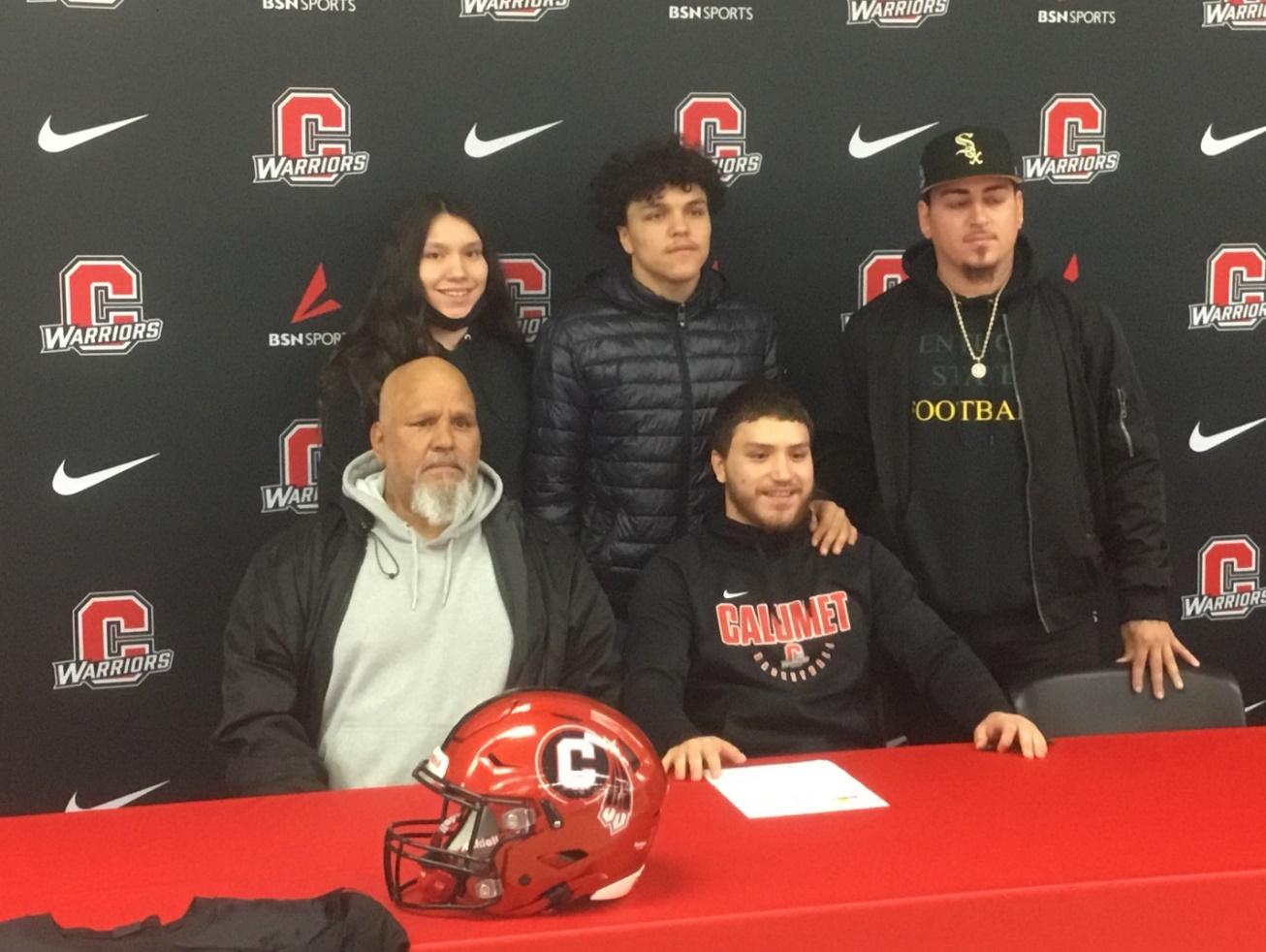 Scott Flores (Center seated) is joined by his father, Mark Flores, Sr., his sister Alexis and brothers David and Jose as he signs his Letter of Intent to play football at Kentucky State University in Franklin, Kentucky.